In the wake of defending my dissertation and landing a new job, I’ve been relaxing by polishing up an R package, PastecR that wraps the API for Pastec, an open-source fuzzy image matching engine.

The creator of Pastec recently launched a hosted version of the service of the service. I’ve just updated PastecR to talk to both self-hosted instances of Pastec, as well as the SaaS instance at api.pastec.io.

Because I use both Travis-CI as well as Appveyor, I needed to jump through hoops to make sure that I could provide the CI services with encrypted versions of my api.pastec.io keys, while also making sure that I didn’t send extraneous keys (encrypted or not) to CRAN.

Jennifer Bryan has a great rundown of how to work with encrypted keys on Travis. But what about Appveyor?

Save key objects as .rda

In order to run tests against the hosted version of Pastec, I need to provide R with keys to my account on the server. api.pastec.io requires both an index_id as well as an auth_key. Encrypting multiple files is a bit of a pain on both Travis and Appveyor, so I sidestepped this by save()-ing both strings into one .rda object that I can easily load again.

You’ll want to load() these keys before running tests, BUT you also want to make sure that CRAN does not try to load this code while building your package:

Encrypt your keys and setup appveyor.yml

Appveyor uses a little tool called secure-file to encrypt files for its service. This installs via nuget, which you can install with homebrew if you are developing on OS X.

Now cd back to your package directory, and encrypt. secure-file requires a secret string. Let’s use AV2016SECRET in this example:

Note that I’ve added the prefix av_ to the .rda.enc file. If you are also running Travis-CI, you’ll need to save a distinct encrypted version of the same hosted_keys.rda file.

See %my_secret% in there? That’s a secret environment variable that we need to provide to Appveyor. To do so, go to Appveyor’s config data encryption tool and enter the secret we used above, AV2016SECRET: 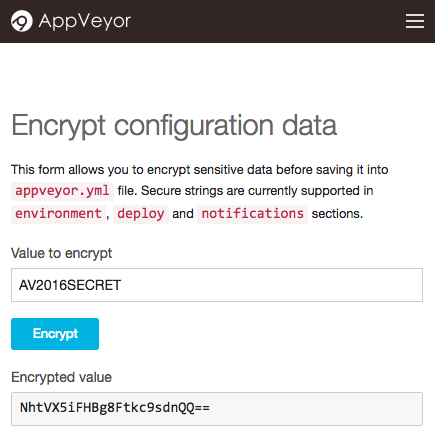 Now add the following lines to appveyor.yml, using the encrypted version of the secret phrase:

We’ll follow generally the same guidelines that Bryan sets out in setting up encrypted keys for Travis-CI:

And git push! With any luck, your package will now build and test successfully on Appveyor.