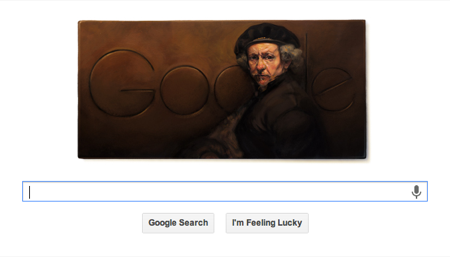 Today’s Google doodle celebrates Rembrandt van Rijn’s birthday 407 years ago in Leiden, and features one of his haunting late self-portraits that hangs today in the National Gallery of Art in Washington.

Sadly, Google missed out on an opportunity to make an even more delightful visual pun with Rembrandt’s slightly later c. 1665 self-portrait now in the Kenwood House in London, which features two circles that would fit perfectly into the middle of a large, painterly “Google”.

If they had chosen this self-portarit, Google would have added yet another layer to these enigmatic circles, which have spurred no small amount of scholarly debate over the decades.

It was B. P. J. Broos who established in 1971 what is likely the best explanation for the circles: that they allude to stories of past master artists famed for their skill with line.1 The legendary artists of Greek antiquity, Apelles and Protogenes, were said to have competed with each other over who could paint the finest, most perfect line. This trope of linear mastery gained its own twist in Karel van Mander’s seventeenth-century biography of the early Italian renaissance painter Giotto. Van Mander tells us how Giotto demonstrated his skill to a representative of a potential patron, Pope Benedict IX:

Giotto was witty; he took a sheet of paper and holding his arm against his side to act as a compass, he drew on it, with a turn of the hand, never moving his arm, a circle so perfect that it was a wonder to see. Having done this, he gave it to the courtier with a grin, saying: there is the drawing. Whereupon the courtier, thinking himself made fun of, answered: am I to have no other drawing than this? This is more than enough, said Giotto, show it to the Pope with the rest, and you shall see whether or not it will be appreciated. He left ill-satisfied. When this drawing came before the Pope among others, and when he had been told in what manner it was drawn by Giotto, without a compass and with a stiff arm, the Pope and his many judicious courtiers understood that Giotto was the best painter of his time.2

Broos showed how the perfect circle shows up again and again in Dutch images from the period, such as Rembrandt’s 1658 etched portrait of the virtuoso Amsterdam calligrapher Lieven Willemszoon van Coppenol. So while Rembrandt shows us an aged, somewhat disheveled figure in the foreground of this self-portrait, the background reminds us that behind that timeworn face is a skilled, modern-day artist who can match the feats of the old masters, and remain in the history books, not to mention museums, more than four centuries later.